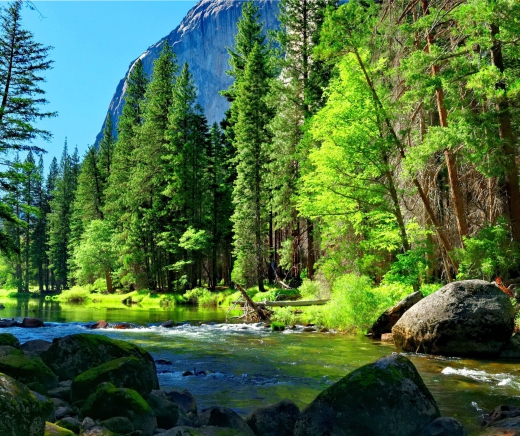 We are not here on earth as museum keepers, but to cultivate a flourishing garden of life.

As a church we are on a journey with Jesus. Along this journey we are slowly awaking to the presence and reality of the person of Jesus, learning His ways, what He values, How He thinks, how He acts, who He was and is, and is to come.  Along the journey, we began to notice metaphors and teaching aids to help us understand and remember, what is the best way to do life.

Last year Pastor Morne Bailey and Nadia Smith opened our thinking to Eden – the walled, enclosed garden.  I believe there is much to learn from gardens, trees, and forests.  Let’s looks at a few examples.

In the following video, you will learn the importance of the circle of life, and how all the diversity of species, plays an important role in the balance of sustainable life being preserved.  When wolves were reintroduced to Yellowstone National Park in the United States after being absent nearly 70 years, the most remarkable “trophic cascade” occurred. What is a trophic cascade and how exactly do wolves change rivers? George Monbiot explains in this movie remix.[1]

Would we all not love to take a hike and experience the magic of old-growth Redwood forests, where giant Sequoias reach 115 meters into the sky for sunlight[2]

Now that I have your attention, let’s look at the Bible’s garden story! The brilliant guys at the Bible Project will get us on the same page first: Union of heaven and Earth under God’s rule is what the Bible is all about. [3] Mankind always seeks out a form of community: political parties, gangs, clubs, peer-pressure-groups, family trees, etc. According to Dr Henry Cloud we thrive on 3 basic things: Our brain/body (the physical), our relational connections, and our minds, which regulate the energy and information needed to live and perform. We are connected in such ways that the reality of how we function always involves these three elements: our physical make up, our relationships, and our minds.[4] But most importantly: A community that does not disciple and nurture you into becoming more like Christ fails your creation purpose.  Let’s, therefore, find our queues and direction from the Bible, and discover God’s true intention for community and life on earth.

For the serious Bible students, here is the literal Hebrew meaning of the Garden of Eden!

H5731. עֵדֶן ‘ēḏen: A proper noun designating Eden: The place where God placed Adam and Eve to live and where they rebelled against the Lord’s words. Satan was permitted in the garden and fostered the rebellion of the first human pair. They were subsequently driven from the garden by God (Gen. 3:21-24). Ezekiel takes the event seriously and notes the presence of an archetype of the King of Tyre in the Garden of Eden (Ezek. 28:11-15).

The precise location of the garden is not known, even though the Tigris and Euphrates Rivers were part of it. It became a symbol of beauty and fertility (Ezek. 31:9; Joel 2:3).

In the Genesis story we find a description of Eden as a lush garden with four rivers (Gen 2:10–14). Eden was also a mountain (Ezek 28:13–14), the administrative “seat of the gods” (Ezek 28:2), situated in “the heart of the seas” (Ezek 28:2), a description that reiterated the well-watered imagery of the divine council headquarters. [5]  What makes God’s earthly home/kingdom different from ancient comparative narratives, the biblical version of the divine council at the divine abode includes a human presence.[6] God wants humanity to share His rule and governance over the earth.

Not all the world was Eden.[7] And Yahweh God planted a garden in Eden in the east, and there he put the man whom he had formed. (Gen 2:8) The garden was perfect in balance harmony and order, yet the rest of the earth was waiting to be subdued.

The distinction helps us see that the original task of humanity was to make the entire Earth like Eden.[8] Eden is where the idea of the kingdom of God begins. And it’s no coincidence that the Bible ends with the vision of a new Edenic Earth (Rev 21–22).[9] The Bible begins in a garden, ends in a garden city, and the in-between is full of stories of God’s encounter with humans in vineyards, orchards, gardens, mountains, fields, and forests. Take out the gardens (Eden, Gethsemane) and the mountains (Sinai, Hermon, Ararat, Nebo, Carmel, Olives, Zion), and you’ve cut the heart out of the Scriptures.[10]

It is also clear that Eden was a temple, or that the temple design was based on Eden.

What is IMPERATIVE to see however is!!! Eden was a place of MEETING.  The first tabernacle, was called “the tabernacle of meeting” Exo 33:7

This fellowship, meeting, communion, community, the family was disrupted and annihilated by sin, disobedience and rebellion!! Jesus is the mediator of the new better covenant to reinstall that unity, bond, the union we once had with God.  But ye are come unto mount Zion, and unto the city of the living God, the heavenly Jerusalem, and to an innumerable company of angels, To the general assembly and church of the firstborn, which are written in heaven, and to God the Judge of all, and to the spirits of just men made perfect,

And to Jesus the mediator of the new covenant, and to the blood of sprinkling, that speaketh better things than that of Abel. (Heb 12:21-24)

The spiritual nature of our “garden” is confirmed by Christ as the angel of the church in Ephesus: “To him who overcomes I will give to eat from the tree of life, which is in the midst of the Paradise (Eden) of God” (Revelation 2:7).

A tree is not a forest. On its own, a tree cannot establish a consistent local climate. It is at the mercy of wind and weather. But together, many trees create an ecosystem that moderates extremes of heat and cold, stores a great deal of water, and generates a great deal of humidity. And in this protected environment, trees can live to be very old. Apparently, the trees synchronize their performance so that they are all equally successful. The rate of photosynthesis is the same for all the trees. The trees, it seems, are equalizing differences between the strong and the weak. Whether they are thick or thin, all members of the same species are using light to produce the same amount of sugar per leaf. This equalization is taking place underground through the roots. There’s obviously a lively exchange going on down there. Whoever has an abundance of sugar hands some over; whoever is running short gets help. This is because a tree can be only as strong as the forest that surrounds it. [12]

So what do these beautiful imageries mean for you and I today? The place of meeting is the EDEN where God reconnects us to all the provision, gold, rivers, nutrition, safety, and protection one needs to not merely survive, but thrive in this life! For if by one man’s offense death reigned by one; much more they which receive abundance of grace and of the gift of righteousness shall reign in life by one, Jesus Christ. This glorious opulence is found when we as church meet together!

Beware of restricting the concept of meeting: Jesus met people in the streets and said: “The Kingdom of heaven is at hand” This Kingdom is within us. (Luk 17:21) Thus the meeting is happening already in our hearts! Because of our glorious union with the Father though Christ being filled with the Holy Spirit, we are in unity in our hearts with the church! This heart-union is expressed in various kinds of meetings happening constantly!

This is why we need to be so careful to not be eating from the tree of the knowledge of good and evil and build an offence against the other because of some partial knowledge we think we have about one another! The tree of life inside makes you eat with tax collectors, and sinners, (Mat 11:19) and is constantly creating a feast in this life. It is multiplying food, healing people, delivering people and eating and feasting with people! Jesus embodied the living temple, EDEN, God’s delight here on Earth as it is in heaven, calling us to do the same!!

Our lives, homes, business, towns and cities should be temples, Eden’s, sacred enclosed gardens of delight, where God’s order and world is restored.  This is God’s ecclesia! This is His church in movement!

There is so much sinning going on! Sin brings separation, destruction, and death. It is a severe battle! God has provided for us an Eden habitat in the church, a heaven-on-earth reality, to draw from one another and flourish!

Next week we will learn about my responsibility as a tree of righteousness: “That they may be called trees of righteousness, The planting of the LORD, that He may be glorified.” (Isa 61:3)

[4]  “The Power of the Other: The startling effect other people have on you, from the boardroom to the bedroom and beyond-and what to do about it” by Henry Cloud.

[10]  “So Beautiful: Divine Design for Life and the Church” by Leonard Sweet.