STAND – Resurrected into a new Life in Christ 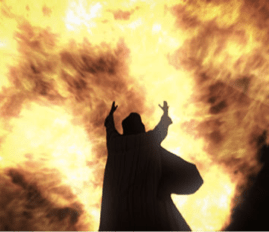 Elijah – stood for justice but most of all he was a prophet calling his people from backsliding to devotion and holiness unto God. Often he laments; “GOD I am standing alone”

When studying this passage it becomes clear that this wonderful miracle of God vindicating his faith was initiated by God. ‘Hear me, O Lord, hear me, that this people may know that You are the Lord God, and that You have turned their hearts back to You again.’ 1 King 18:37 The similar kind of prayer was prayed when Jesus raised Lazarus. Father, I thank You that You have heard Me. And I know that You always hear Me, but because of the people who are standing by I said this, that they might believe that You sent Me.” Joh 11:42

Two of the greatest miracles in the Bible and it is done without much fanfare, pomp, elaboration and outward expressiveness. This simplicity is one of the reasons we believe the gospel writer’s account of what happened in Jesus’ life. Embellished and extravagant details are strong signs that a historical account has legendary elements. The Gospels give matter-of-fact, almost bland descriptions of the Resurrection. Excerpt From: “I Don’t Have Enough Faith to Be an Atheist (Foreword by David Limbaugh)” by Norman L. Geisler. Scribd.

And when I came to you, brothers and sisters, proclaiming to you the testimony of God [concerning salvation through Christ], I did not come with superiority of speech or of wisdom [no lofty words of eloquence or of philosophy as a Greek orator might do]; for I made the decision to know nothing [that is, to forego philosophical or theological discussions regarding inconsequential things and opinions while] among you except Jesus Christ, and Him crucified [and the meaning of His redemptive, substitutionary death and His resurrection]. And my message and my preaching were not in persuasive words of wisdom [using clever rhetoric], but [they were delivered] in demonstration of the [Holy] Spirit [operating through me] and of [His] power [stirring the minds of the listeners and persuading them], so that your faith would not rest on the wisdom and rhetoric of men, but on the power of God.
1 CORINTHIANS 2:1‭-‬2‭, ‬4‭-‬5 AMP

This wonderful sign did not change or move the heart of the people. Jezebel pursued him and tried to kill him. Because all signs and wonders points to a higher and greater reality, that of a lifestyle of obedience and holiness. We are the most healed and whole when we are the most like Jesus. A whole heart, free from iniquity, vile, or deceit.

The focus on healing, signs & wonders, prosperity, wealth, victory, miracles in the Pentecostal church in Africa will either testify against them of for them if it does not lead to holiness, reconciliation, repentance, humility, meekness, truth, and people reflecting Jesus to the World.

Joe Church stayed with friends on Namirembe Hill and on the Sunday morning walked up to the cathedral. Outside it was an African standing by his motor-bike. His name was Simeoni Nsibambi. ‘There is something missing in me and the Uganda church. Can you tell what it is?’ Simeoni asked Joe. The two men spent two days studying the Bible and praying together. In a subsequent letter home, Joe wrote. There can be nothing to stop a real outpouring of the Holy Spirit in Rwanda now except our own lack of sanctification.’ Both men were transformed and Joe went back to Gahini in Rwanda a new person. Immediately conversions began to take place, and Christians started to confess faults and resentments to one another. Forgiveness was experienced and broken relationships restored.

God is calling the church in Uganda to maturity: children makes a lot of noise, not having substance. This speaks of a position in God, a standing in God. Before we can attempt to stand in this world for God, we have to lay down and surrender to God. Therefore submit to God. Resist the devil and he will flee from you. Draw near to God and He will draw near to you. James 4:7-8

Is anyone among you suffering? Let him pray. Is anyone cheerful? Let him sing psalms. Is anyone among you sick? Let him call for the elders of the church, and let them pray over him, anointing him with oil in the name of the Lord. And the prayer of faith will save the sick, and the Lord will raise him up. And if he has committed sins, he will be forgiven. Confess your trespasses to one another, and pray for one another, that you may be healed. The effective, fervent prayer of a righteous man avails much. Elijah was a man with a nature like ours, and he prayed earnestly that it would not rain; and it did not rain on the land for three years and six months. And he prayed again, and the heaven gave rain, and the earth produced its fruit. James 5:13-18

The English word righteousness comes from the Anglo-Saxon word, rightwiseness, wise in that which is right. In the original Greek it is “Dikaiosune” meaning two parties finding a likeness in one another, to join, to be set at one again. We become wise when we realize our oneness with God in Christ.

This speaks of a position in God, a standing in God. Before we can attempt to stand in this world for God, we have to lay down and surrender to God. Therefore submit to God. Resist the devil and he will flee from you. Draw near to God and He will draw near to you. James 4:7-8

Paul alloborates this clearly in Ephesus
Sit, stand, walk – This position is not attained through works or effort of man but through faith in His work. My complete trust is in His finished work. This is why we always start sitting. Sitting in heavenly places. Eph 2:6

Our first position of departure is always surrendered.

Elijah did not strive and performed rituals like the false prophets. He simply obeyed an instruction God gave him, and God did the rest.

The one thing the world has seen enough of, is man standing. Rebellion, entitlement, pride, arrogance, even for the right cause brings anarchy, pain and war. We instead learn to die to self, take up our cross, and follow His way. Mat 16:24

When Jesus is doing the standing in you, he works meekness, humility and gentleness in us that is much more powerful weapons. 2 cor 10:3-6 than the works of the flesh.

Once this is achieved Jesus will stand in you, all the time. His life, way, values and character becomes the weapons of our warfare