The Governmental Church in the Locality 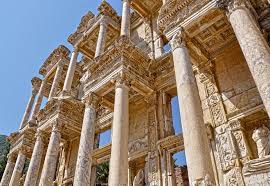 Paul planted the Church in Ephesus during a stop-over leaving Corinth to travel to Jerusalem in 53 AD.  He visited the synagogue in the city, and left Priscilla and Aquila, dedicated elders and custodians to the truth.  (Acts 18:18-22)

On his return from Jerusalem, Paul travels to Ephesus and establishes there his longest ministry in any one location. Paul’s first works was to relay apostolic foundation re-baptise twelve disciples in the name of Jesus, and pray for them to receive the Holy Spirit. (Acts 19:8–10) Then he established the first NT Bible Training Centre first in Jewish Synagogue“arguing persuasively about the kingdom of God” then for 2 years daily in the lecture hall of Tyrannus” with both Jews and Gentiles. (Acts 19:8–10) From the scriptures in Acts, Ephesians and finally in revelation captures almost 44 years of local church history in Ephesus. 52 AD – 96AD sadly by 200AD the church died out. The point is that although there is no longer a city of Ephesus, the church in Ephesus used to be the strongest church in Asia Minor, and now there are hardly even any Christians to be found in all of Asia Minor, let alone a church of any strength or size. Turkey is 99.8% Muslim, leaving only .2% as Christian. And even this .2% is in rapid decline. Turkey, although it used to be a fortification of Christianity, is now the largest unreached nation in the world and one of the strongest propagator’s of Islam. Most of the nation’s 55 million Muslim’s have never even heard the gospel. [1]

A deeper study of these two key words in the Great Commission is:

“Teach/Disciple” Mathēteúō means not only to learn, but to become attached to one’s teacher and to become his follower in doctrine and conduct of life.

Nations: éthnos; A multitude, people, race, belonging and living together. We have a mandate to disciple the local Ethos! Because of globalisation, the separate boundaries of nations, and ethnic groups has become vague, schools, the work place, shopping centres and public spaces do not belong to a specific nationality anymore. Ethos : Sociology. the fundamental character or spirit of a culture; the underlying sentiment that informs thebeliefs, customs, or practices of a group or society; dominant assumptions of a people or period:

We are not only leaders of the church, but also of the city.

The Book is written to: “To the saints who are in Ephesus, and faithful in Christ Jesus” [2] not to an individual, and possibly the most well taught church that ever existed.  The letter/thesis was thus written to all the people of the way, believers in Jesus Christ in the Locality/city of Ephesus.  I believe God is calling us to be shepherds to whole communities of people in a location.

Restoring the reign of God like Eden in every Location.

In the Genesis Story we find a description of Eden as a lush garden with four rivers (Gen 2:10–14). Eden was also a mountain (Ezek 28:13–14), the administrative “seat of the gods” (Ezek 28:2), situated in “the heart of the seas” (Ezek 28:2), a description that reiterated the well-watered imagery of the divine council headquarters. [3]  What makes God’s earthly home/kingdom different from ancient comparative narratives, the biblical version of the divine council at the divine abode includes a human presence.[4]

God wants humanity to share His rule and governance over the earth.

Not all the world was Eden.[5] And Yahweh God planted a garden in Eden in the east, and there he put the man whom he had formed. (Gen 2:8) The garden was perfect in balance harmony and order, yet the rest of the earth was waiting to be subdued.

The distinction helps us see that the original task of humanity was to make the entire Earth like Eden.[6] Eden is where the idea of the kingdom of God begins. And it’s no coincidence that the Bible ends with the vision of a new Edenic Earth (Rev 21–22).[7] The Bible begins in a garden, ends in a garden city, and the in-between is full of stories of God’s encounter with humans in vineyards, orchards, gardens, mountains, fields, and forests. Take out the gardens (Eden, Gethsemane) and the mounts (Sinai, Hermon, Ararat, Nebo, Carmel, Olives, Zion), and you’ve cut the heart out of the Scriptures.[8]

And for the purpose of the study: Ephesus was an example of precisely just that: To him who overcomes I will give ito eat from jthe tree of life, which is in the midst of the Paradise of God.” ’[9]

How do we exercise authority?

Good governance begins with good administration.  You rule over that what you control or administrate. The measure of your administration equals the measure of your authority.  God is order. When we get saved, He brings order in our lives. When God’s spirit hovered over the earth, the earth was without form (order) and void. When God created all living things, He created order. His order. There are always two orders: The order of man and the Order of the Spirit.

When the order of the Spirit was followed anointing flowed.  Temple in order – Shekinah. Lev 1:7,8,12 Bringing order in your life, creates flow and currency to your anointing. It flows easier, less obstructions and distractions.  It focusses the anointing on one thing.  They had to pack the wood in a certain order to receive the fire. Order in Levites, Priests, Offerings Num 10:28 Do (divine) measurements really matter?

1922. ἐπίγνωσις epígnōsis; gen. epignṓseōs, fem. noun from epiginṓskō (G1921), to recognize. It is more intens. than gnṓsis (G1108), knowledge, because it expresses a more thorough participation in the acquiring of knowledge on the part of the learner.

IN other words: The ultimate goal of discipleship is to get people to internalize the truth of Jesus Christ, so that they naturally have an inner ear or modulator to remain focussed on Him. (Heb 12:1) We can fulfil the social gospel, building needed schools and creches, but if we do not teach people to become followers of Christ we have failed our mission.  We are in this mess, because of people’s ignorance of Jesus, and the church in a big way misrepresenting Jesus.

Ekklesia by its original definition a governmental assembly to implement the pattern, logos, measurement, doctrine, values, structures, and practises of the reigning kingdom into the old nation. The OT temple was located in one place Jerusalem, enclosed garden, temple city. This model get’s replicated to everywhere where believers dwell.

Ephesians 1:9-10: “making known unto us the mystery of his will, according to his good pleasure which he purposed in him unto a dispensation of the fulness of the times, to sum up all things in Christ, the things in the heavens, and the things upon the earth; in him” (ASV)

“so that now to the rulers and powers in the heavenlies might be known by the church the manifold wisdom of God”(3:10, NKJV) Governmental position to declare the reigning Kingdom’s values to the captive state.  A new form of community. Whether one talks about economics, public safety, healthcare, or personal achievement one study after the other proofs the best way to do life is through healthy community.  Community policing, community micro-finance banking, home-base-care, and the community that supported and help someone to achieve their olympian dream. There is also the dark side; cults, gangs, dead religion, structural sin where a culture embrace for instance a sinful belief system that devaluate, dehumanise people like racism, feminism, slavery, entitlement.

The Ruling Kingdom has already taken its position

He put all things under His feet, and gave Him to be head over all things to the church, which is His body, the fullness of Him who fills all in all. (Eph 1:22-23)

even when we were dead in trespasses, made us alive together with Christ (by grace you have been saved), and raised us up together, and made us sit together in the heavenly places in Christ Jesus, (Eph 2:5-6)

we are His workmanship, created in Christ Jesus for good works (Eph 2:10)

Jesus told the disciples: And as you go, preach, saying, The kingdom of heaven is at hand.’ Heal the sick, cleanse the lepers, raise the dead, cast out demons. Freely you have received, freely give (Mat 10:7)

The sad truth is how few believers and followers of the way of Christ, walk in this victory, as ambassadors, statesman, a holy priesthood, mediators, reconcilers, peace-makers, miracle workers, disciple-makers, of the most high God!! We are officials of the reigning Kingdom!

Demonstration of our Proclamation

Real Spiritual power tested: Sons of Sceva (Counterfeit) (Acts 19:13-20) This story reverts to the vital importance of individual anointing. I write unto you, young men, because ye have overcome the wicked one.  (1 John 2:13)

Sizable national display of tipping point towards new order.  (Acts 19:21-41) Like Jesus prophesied that the temple will be removed, and in 70 ad it did happen. To this day there can be no temple. The religious cult of Diana Worship ended and is no more. [10]

of a set of new values. (Eph 2:11-18)   so that all who dwelt in Asia heard the word of the Lord Jesus, both Jews and Greeks (Acts 19:10) The Jesus Culture is the only way how we can redeem each diverse culture back to its own unique redemptive purpose.  There is an oppressor and enslaver/pharaoh in every culture. We all need to be redeemed from our Egypt/enslaved cultures.  No nation has suffered so much persecution than the Jews. Several times at the brink of extinction, they rise again. One of the pillars of this theocentric society is the bedrock of the family. and the important role and function of the father. God is a family. The absolute primary way how Christianity rules and governs society like yeast, salt and light is through the restoration of Godly families.

The Roman economic gateway to Asia, became the gateway for the message of the Kingdom of God. Resulting in a Deculturalization of the economy and religious order. (Acts 23-40) On the great day of Pentecost, when the new covenant was sanctioned, a Spiritual Jubilee took place. Now all who believed were together, and had all things in common, and sold their possessions and goods, and divided them among all, as anyone had need. (Acts 2:44) It is our testimony that when people truly turn to God and become full of the Holy Spirit, they relinquish ownership of their own bodies and possessions.   The Tri-Sabbatical Jubilee of restoration for Mankind and the Earth fulfilled in Christ’s resurrection. The tri-sabbatical rest: The seventh day, the seventh year, and after seven cycles, the 49th year Jubilee is a divine rhythm instituted by God for the benefit of man and nature. God knows humankind, how work and profit can consume us, how we do not know when to stop and rest. The end result is work gets a bad name and what is intended to be a blessing becomes a curse. The truth is; however, work is good for us. All mankind should work and earn a living through their skill and contribution to each other. [11]

The Fivefold Ministry lays the foundational worldview, practises, patterns and structure of the Kingdom of God.  (Apostle – Government, Prophet – Law & Order, Evangelist – Economy, Pastoral – Health, Teacher – Education) Social structures are complex, but by reforming the mind of people working in government, business, lawmakers and enforcers, health practitioners, and educators back to their redemptive calling in Christ we will see a whole community follow the Way.

Unity is not pursued, it is received as a fruit of right living.

Warning to return to first love, and doing the first things. (Rev 2:1-7)

[8]  “So Beautiful: Divine Design for Life and the Church” by Leonard Sweet.