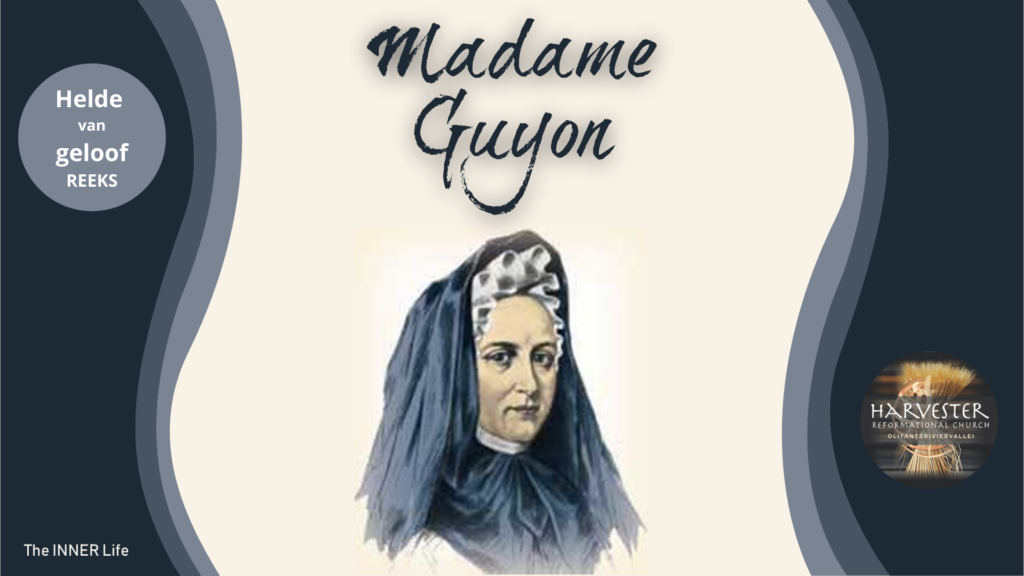 The way of union with God – Madame Jeanne Guyon

“My earnest wish is to paint in true colors the goodness of God to me, and the depth of my own ingratitude”

Sin – Miss the mark. Mark – identity, blueprint, stamp, consciousness = mistaken identity, duality, double-minded, not living up to the image of Christ, not living according to the word.

To live by means of His grace. Righteousness/justification by faith. Peace and joy in the Holy Ghost. In right standing with God. (Mat 6:33 and Rom 14:17)

2. The effective touch of God in our will

Christ within the hope of glory. Blind abandonment to Him. Led inwardly.

Everything is done naturally, feeble will cannot make headway. Move by degrees of divine touch from God as if by faith and silence. The process of the destruction of appetites and dislikes, are only by the divine touch of the grace of God within the anointing.  Obedience and abandonment – surrender.

The passivity of the soul replaces activity. The second stage deals with the destruction of outward activities. Longer and more frequent times of dryness.

Nothing but internal and external desolation. Deprived of voluntary works. Suffering the removal of everything.  Given with no strength at all to temptations.

Move from various ways into one single way of consciousness. Will gives no support to the soul. Will weakens until there is nothing left. Extracting the poison of the viper cannot resurrect until complete death has occurred.

5. The mystical death of the soul

Die to self in the arms of love is the ultimate death of everything. When you feel nothing, will nothing, think nothing. No preference, no pretense, indifference – liking or disliking nothing, process completed. Knowledge of good and evil uprooted. Life is a living seed, that produces after its own kind the fruit of righteousness, the tree of life.

Infinite contentment: a total and entire loss of the will of self, totally emptied of self. Loose everything that self claimed as its own, self looses all possession of the soul. Union with God without any intermediate.

This is a mystery, discovered by those who diligently seek Him, with fear and trembling.  We can only ultimately have union with God, by our faith in the finished work of Jesus Christ.  Living by faith in this grace, called salvation in the power of His resurrection.  Union is possible only after all flesh has been consumed.

The Presence of God

God has a peculiar way of drawing us after Himself. He moves on and if we stand still we tend to feel He has left us behind or that we miss His presence. Jesus gave a key to this situation when He said, when the bridegroom is with His friends they do not fast, but when the Bridegroom leaves His friends will fast.

The Pharisees wanted to know why Jesus’ disciples do not fast on regular days as they do as to keep their rituals and festivals. Jesus said, they only fast when they miss my presence. Life has a way of draining our spiritual life, emotional life, mental life and physical life. To replenish this life on all four levels you require a refreshing. Refreshing comes from the presence of the Lord (Acts 3:19).

Brother Lawrence (a disciple of Madame Guyon) learned some invaluable lessons in practicing the presence of God. At first he would keep on forgetting that God was with Him. But as he kept on reminding himself it became hard to forget that God was with him all the time. When the monastery gave the set hours for the monks to ‘seek’ God, he would find it very strange, because God was now with him all the time. The consistency of that knowledge brings rest. It is when we neglect to consistently spend time with God that seeking him in isolated cases becomes an unnatural effort that drains us and makes us feel as if we are far from God.

God is simply saying, seek me consistently, for I am with you – always. If someone is with you, it is hard to go and seek them. The extra effort we put in is not rewarded immediately, like instant coffee. It is a mere cramming like before exams and it tires your mind, soul and spirit.

The rest of faith comes with final assurance that the Lord promised never to leave or forsake us. He said He would be there. We act as if He is not there. So we seeking something we have already – chasing the carrot.

Be still and know that I am God.

Enter into My rest.

I am with you.

I will never leave you.

When you study the word, when you pray, when you work or play, the Lord is there. Meditate on these things.

May the Lord give you understanding.

“A person truly humbled permits not anything to put him in a rage. As it is pride which dies the last in the soul, so it is passion which is last destroyed in the outward conduct. A soul thoroughly dead to itself, finds nothing of rage left.”

“He destroys that he might build; for when He is about to rear His sacred temple in us, He first totally razes that vain and pompous edifice, which human art and power had erected, and from its horrible ruins a new structure is formed, by His power only.”

“Whatever truth you have chosen, read only a small portion of it, endeavouring to taste and digest it, to extract the essence and substance thereof, and proceed no farther while any savour or relish remains in the passage: when this subsides, pick up your book again and proceed as before, seldom reading more than half a page at a time, for it is not the quantity that is read, but the manner of reading, that yields us profit.”

Madame Guyon, A Short and Easy Method of Prayer

“We must, however, urge it as a matter of the highest import, to cease from self-action and self-exertion, that God himself may act alone: He saith by the mouth of his prophet David: “Be still and know that I am God” (Psalm 46:10)

Madame Guyon, A Short and Easy Method of Prayer