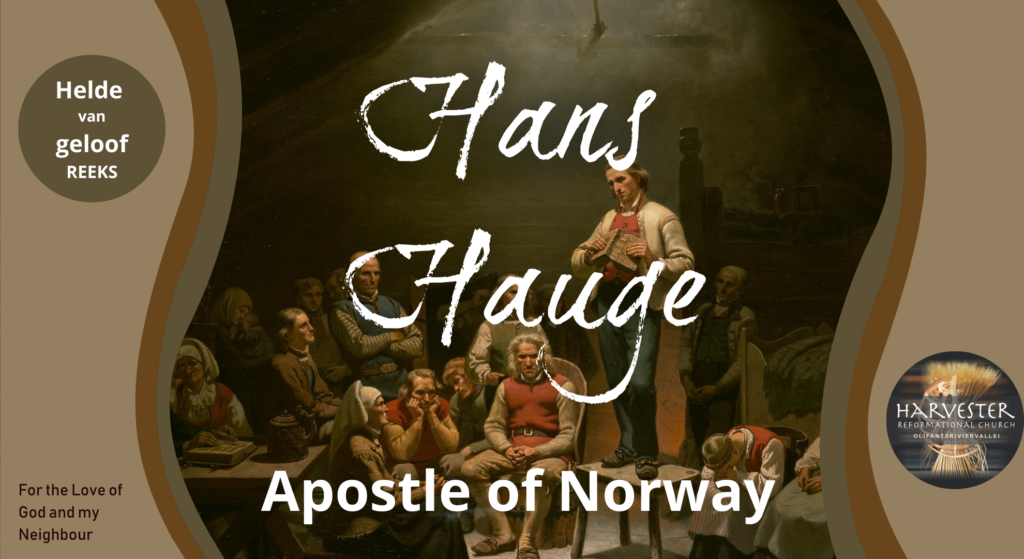 The Apostle of Norway: Hans Nielsen Hauge (1771– 1824) 53years – a religious and societal reformist and entrepreneur.

A Prophet Behind the Plough – work and service is something that will shine for others to see, and that “love should serve all.”

“Hauge was a man ahead of his time. He was an entrepreneur and industrialist, and his pioneering influence is still visible in Norwegian society and business life today. Hauge believed that in a Christian society all people should be of equal standing and value. In his writings, he focused on the idea that jobs were to be created and financial returns shared for the betterment of society as a whole. Everyone needed to be engaged in useful work; no one should left to beg, suffer want or lack meaningful employment. While recognizing the importance of the individual, Hauge’s vision for society was one of solidarity and cohesion. The movement he created gave people hope of a better future. In Hauge’s view everyone had a responsibility to use their talents and abilities for the common good.” – Oslo, September 2021 Prime Minister of Norway

When Hauge was 25 years old, he experienced a spiritual breakthrough, as he was working on the fields of his parents’ farm and singing the hymn “Jesus, din søte forening å smake” (Jesus, thy sweet union to taste). He experienced an overwhelming sense of God’s presence and love, which changed the course of his life forever. From that day onwards, he felt compelled and driven by a divine calling, “to love God and my neighbour”. During the following eight years, he covered more than 15,000 kilometers, mostly on foot, by horse carriage or boat, travelling all over Norway as he preached a message of repentance and forgiveness.

His Support of the Norwegian Economy

Hauge saw new business opportunities everywhere he went. Maintaining funding for the Hauge movement and creating new jobs motivated him. He himself established more than 30 businesses, including textile mills, mining companies, printing presses, binderies, shipping companies, salt works and trading companies. Hauge also provided financing or helped to recruit managers for the launch of many other businesses. He also started one of Norway’s first electric power plants.  During his travels all over Norway, mostly by foot, Hans Nielsen Hauge discovered that the northern part of Norway was in desperate need of flour and other necessities, especially during years of famine. Thus, as a merchant, he became involved in different trading activities in the northern part of Norway, exchanging flour and other necessities with fish.

In 1815, he married Andrea Andersdatter, who later died in childbirth that same year. In 1817, he married Ingeborg Marie Olsdatter (1791–1872) and bought the Bredtvet farm (now the site of Bredtvet Church in Oslo), where he died. Three of his four children died in infancy. His surviving son, Andreas Hauge, became a priest in the Church of Norway and Member of the Norwegian Parliament.[9]

Hauge was a prolific writer and wrote his first book just a few months after his spiritual breakthrough in 1796. Throughout his lifetime, he was Norway’s most-read author. According to Haukland, he wrote and edited more than 40 different texts (Haukland 2014 p. 539), which were printed in at least 200,000 copies. Jensen concludes with 34 texts of his own authorship with an estimated 600,000 prints.

He started or restarted about 30 companies himself, and he was directly or indirectly involved in establishing about 150 business units, and it is estimated he and his followers created between 7,000 and 8,000 jobs in the time period 1801 to 1828, during a period where Norway’s population was about 900,000.

“My vocation is to love God and my neighbour.” This news article was written as a response to criticism from a local merchant accusing him of mixing religion and business. However, Hauge saw that lifting people out of poverty, creating jobs, and improving the common man’s literacy skills by doing business as a way to practice his faith. According to Hauge, hard work, modesty, and reinvestment of profit with a mission to serve society was part of the Christian calling and responsibility. He stands out as an entrepreneur within the industrial, religious, political, social, and educational spheres of society. Hauge deemed this as a Christian call of stewardship.

Significant parts of his followers were active in political, social, religious, and industrial life. Some became pioneers in building democracy, rule of law, liberalism, welfare, education and social reforms. They were skeptical of centralization, large public spending, privileges, monopolies and established political and religious systems. He was arrested ten times between 1797 and 1804, when he was finally imprisoned without trial for seven years. He was released for seven months in 1809 in order to help the authorities with the establishment of salt distillation plants during the British blockade due to the Danish support of Napoleon’s war against the United Kingdom.

“The primary Duty is to spread Knowledge of the Word of God. However, (…) the Lord commissioned our first Parents to cultivate the Land (…) the Brethrens should, according to God’s will, produce necessary Clothing and Food (…) in order to enlighten them with the Love of Christ (…) To show Faithfulness in this earthly Ministry, is the Calling and Duty of Christian Citizenship (…) This is my basic doctrine.” (Hauge 1800; 216).

“If you have been trusted with some Pounds by God in the Spiritual or Physical Realm, be faithful House- keepers over them, and do not magnify Yourself, but remember they are God’s Property borrowed by you.” (Hauge 1796, p. 106).

“Those who will not work should rather not eat. (…) I will, however, build Factories, be involved in Trade, work in the help of Crafts, and when Time and Energy allows, preferably cultivate the Land.” (Hauge 1802).

“(God) provides us with His Blessings hidden by our Labour , Efforts and the Gifts of Nature (…) The Employees are never Subjects, but Subordinates, (…) if the Employer does not provide his Subordinates fair Salaries, Food and Clothing in due Time, the Employer is a Thief.” (Hauge 1804, pp. 292–293).

Hauge took part in establishing and restarting at least 30 manufacturing plants. However, he was not always successful. He was at times in desperate need of capital. During the year of his final arrest in 1804 he had significant financial losses. The value of his assets nevertheless was higher than his debt. Due to the imprisonment, he ended up indebted. Through goodwill from friends and contacts, and financial compensation from the government, he made up his balance.

Mills. In 1815 Hauge started his own grain mill

Fish processing. Hauge was engaged in equipping fishing boats for herring fisheries. When doing so he learnt different ways of fish preservation, like salting, drying and smoking. He generously shared it within his network.

Copper mine. During one of Hauge’s journeys in 1803 he was told copper was discovered at Vingelen in Østerdalen in Eastern Norway. However, a dispute over ownership rights made him sell the mines with a considerable profit (Kvamen 1971, p. 75).

Paper mills. Hauge took an active part in the establishment of a paper mill in Aadalen, Eastern Norway.

Printing. In 1803 Hauge bought a printing house in Kristiansand, as he saw a possibility of publishing his own books, magazines and a newspaper,

Brick factory. Due to huge crowds in 1804, Hauge had to move evangelical meetings to a former brick factory at Eeg close to Kristiansand. He soon suggested that a young man in his network, Ole Eyelsen, should restart production. The buildings were bought with Hauge as investor and banker. It earned considerable profits and expanded regularly (Brei- stein 1955, p. 137).

Textile mills. Hauge gained increasing interest in the textile industry. He took part in the establishment of the Drammen textile mill in 1818. It grew to become the greatest spinning mill in Norway, and a pioneer company regarding labour welfare. It continued its production until 1992.

Salt distillation. During the war with the United Kingdom, the Danish-Norwegian King gave Hauge permission from jail to teach potential entrepreneurs to distil salt from seawater. Many of his students became his followers. It marked the start of a network in a fast-growing fish processing industry, producing salted herring and cod for exports to the European continent and later to South America.’

Investment. Hauge invested significantly in risky projects with borrowed money. The volume of his engagement as an investor was quite impressive and losses were surprisingly small. Through his involvement, he contributed to projects by his brethren in faith (Helgøy 2010, pp. 27–38).

Banking. During almost his entire business career of Hauge, there was no regular bank in Norway. Thus, he filled the vacancy as a banker.

Social Equality. Hauge gave women the right to preach the gospel, and many of his followers maintained this line, and introduced women’s right to vote in mission congregations, long before than in general elections They also introduced steps towards more equal salaries for the genders. Hauge authored 33–34 books and pamphlets on spiritual life, often with a political message of individual freedom and responsibility. These were perhaps published in as much as half a million copies or even more. Hence, he was one of the most commonly known authors of his time. Part of his writing was translated into foreign languages.

Welfare and education. Hauge became involved very early in setting up schools for orphans and poor people. He had an extensive program for training managers within his network on bookkeeping and technical skills.