Let’s be weary as to not rule over one another as believers. We are destined to rule through Christ over our sin, our uncontrolled emotions, our thoughts that is raised against the knowledge of God, our destructive habits, and overcome satan and the rulers of darkness. We shall not rule over man.

We are called to be commander FOR the people, not OVER the people. (Isa 55:4)

We were not instructed to rule on earth or have earthly kingdoms.  “Jesus answered, “My kingdom is not of this world. If My kingdom were of this world, My servants would fight, so that I should not be delivered to the Jews; but now My kingdom is not from here.”” (John 18:36, NKJV) We will one day rule with Christ, over cities, and receive a crown as a reward for our earthly faithfulness and obedience. Jesus never wore an earthly crown, but the crown of thorns. He never aspired for positions, grandeur, recognition, or making an impression in the flesh.

When the King of Kings, Lion of Judah, the sovereign ruler was revealed, He appears as the slain lamb.  “saying with a loud voice:“Worthy is the Lamb who was slainTo receive power and riches and wisdom,And strength and honor and glory and blessing!”” (Revelation 5:12, NKJV) The power from below, is the power of the dragon. The two beasts/dragons that appeared from the earth and the sea, devours, kill and destroys.

“Who is wise and understanding among you? Let him show by good conduct that his works are done in the meekness of wisdom. But if you have bitter envy and self-seeking in your hearts, do not boast and lie against the truth. This wisdom does not descend from above, but is earthly, sensual, demonic. For where envy and self-seeking exist, confusion and every evil thing are there. But the wisdom that is from above is first pure, then peaceable, gentle, willing to yield, full of mercy and good fruits, without partiality and without hypocrisy. Now the fruit of righteousness is sown in peace by those who make peace.” (James 3:13–18, NKJV)

Being salt and light is not about ruling but about spreading the love of God through serving, and doing good. (Acts 10:38) We gain ground, by going low. This is how the Kingdom is advanced. Through weakness we wax strong.  The least in the kingdom is the greatest. The meek inherit the earth.  The power you attain in the flesh you have to maintain in the flesh.

Jesus gave authority. Man usurps and desire power. The true heart of the father is revealed in how we empower people.

Our prayer meetings and initiatives are vital and important as to show our true dependence on God.  But the true fast that the Lord requires, is a fast demonstrated in how we serve people, brake the bonds of the oppressed, and bring peace. (Isa 58) We cannot continue to oppress people, and try to redeem ourselves with more spiritual activities. What powerful revival will flood this nation when instead of praying more in isolation, we start going out in the streets praying for people in need. 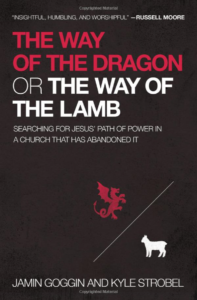 The Way of the Dragon or the Way of the Lamb: Searching for Jesus’ Path of Power in a Church that Has Abandoned It
by Amazon.com Learn more: https://www.amazon.com/dp/0718022351/ref=cm_sw_em_r_mt_dp_U_CeURCbCSHM4KB