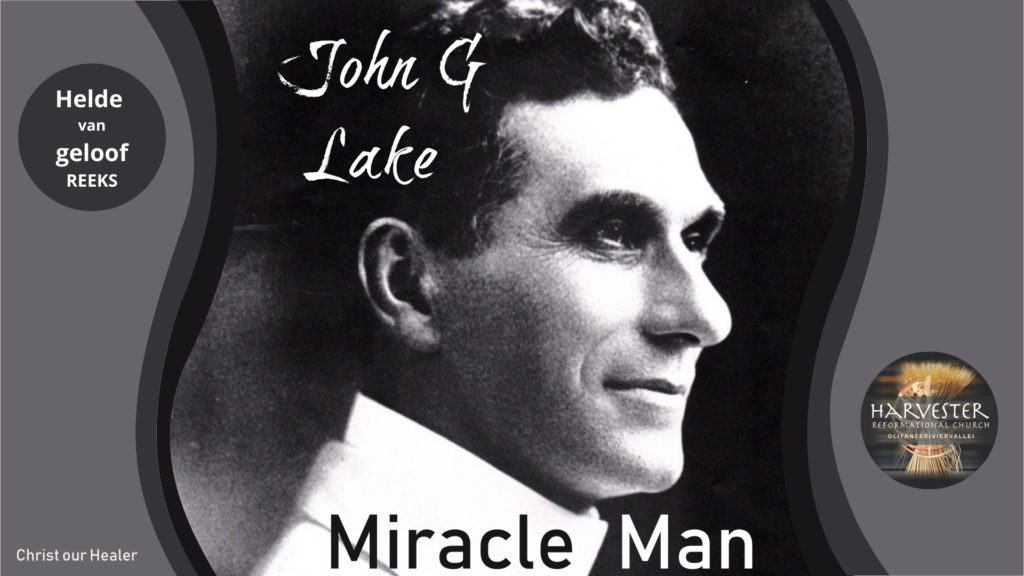 Arguably the most influential religious figure in South African history, Lake introduced a host of new practices on his mission. These included faith healing, “raising the dead” and speaking in tongues. Lake also made use of an array of “signs and miracles” in his dramatic services. Co-founder of the Apostolic Faith Mission of South Africa. Through his 1908–19 African missionary work, Lake played a decisive role in the spread of Pentecostalism in South Africa, the most successful southern African religious movement of the 20th century.

John Graham Lake was born on March 18, 1870 (16 September 1935) in Ontario, Canada. When he was a boy, his family moved to Michigan, in the United States. During these years, Lake attended a Salvation Army meeting and became convicted of his need for a savior, and he invited Jesus to become Lord of life.

Lake was incredibly impacted by illness. He was one of sixteen children, and over the course of his young life eight of them died. He grew to hate sickness, grief, and death that was so much a part of his family’s life. His brother was an invalid, one sister had extensive Cancer, another sister had bleeding problems, and his wife had Tuberculosis and Heart Disease.

“CHRISTIANITY is nothing if it be not supernatural.” It is only where this is fully realized and acted on that the true Church can flourish. Christianity is a religion that came down from heaven and has still unceasingly to be received from there. It is ever dependent on the extent to which its believers yield themselves to the immediate operation of the Divine power.” Andrew Murray – The State Of The Church.

The American Mission to South Africa

“We prayed earnestly over this matter. About the time we reached the Equator, a rest came into my soul concerning it, and I could pray no more.”

“I am going to line up with the rest. We have obeyed God this far. It is now up to the Lord.”

“Throughout the voyage we earnestly prayed about the subject of a home. As faith missionaries, we had neither a Board nor friends behind us to furnish money. We are dependent upon God. Many times during the trip to Johannesburg, we bowed our heads and reminded God that when we arrived there we would need a home.’

One day some years ago, being environed by certain conditions powerful and influential enemies who pamphleteered us throughout the whole world, broke confidence in our work for God to that extent that the little pittance of financial support almost dwindled away. I had one hundred and twenty workers out on the frontiers of South Africa, beyond the confines of civilization. The question arose as to what to do for these at such an hour. I said, “There is only one thing. That is, be honorable with these men and women. Let them know the true condition. If possible, let us call them in and let them decide as to the best thing to do.” So we sold our household possessions; we sold our watches, we sold everything that was salable for money enough to bring that hundred and twenty in.

When they arrived in Johannesburg, I poured my heart out to them as I am to you today. And after a while they said, “Brother Lake, we would like to be alone for a little while and we ask you to retire. We have a decision to make.” I retired into the vestry for a half hour, and then they called me in. When I came in I found the hundred and twenty sitting in an oval in the middle of the tabernacle. They had cleared the chairs away, made a large open circle with a hundred and twenty seats around, and a little table in the middle with bread and wine. They said, “Brother Lake, we have made our decision. We are going back to our fields. If we die, if our wives die, if our children die, we will never reduce that ministry that Jesus Christ has established through this work in Africa and passed the wine around. And every man said, “The new testament in my blood,” meaning, “my blood to save South Africa.”

They put only one restriction: They said, “Brother, if we die, one request-come and bury us.” And twelve times in that year of hell, I stood beside twelve of the finest men and sixteen of the finest women and children God ever let live in this world. I buried them because they starved to death, or they died because they could not get proper nourishment, such as a white man could live on. That is the reason that the work in South Africa lives, and that is the reason that all the damnation on earth has never been able to assail it. But like a conquering glory it has gone on these years, conquering and conquering in the name of our Christ, until my hundred-and-twenty have grown to two-hundred-and-fifty white preachers of the same character and until our five-hundred black preachers have grown to be twelve-hundred preachers of the same type and character, and until our mission stations are planted all over Southern Africa.

“The astounding percentage of those who were healed was, I believe, due to the system we adopted. We insisted that the individual should present himself for prayer and laying on of hands every day until we were satisfied that they were fully healed.”

The greatest manifestation of the Holy Ghost baptized life ever given to the world was not in the preaching of the apostles; it was not in the wonderful manifestations of God that took place at their hands. It was in the unselfishness manifested by the church. Think of it! Three-thousand Holy Ghost baptized Christians in Jerusalem from the day of Pentecost onward who loved their neighbors’ children as much as their own, who were so anxious for fear their brethren did not have enough to eat, that they sold their estates, brought the money, laid it at the apostles’ feet and said, “Distribute it. Carry the glow and the fire and the wonder of this divine salvation to the whole world.” That showed what God had wrought in their hearts.

Oh, I wish we could arrive at that place, where this church were baptized to that degree of unselfishness. That would be a greater manifestation than healing, greater than conversion, greater than baptism in the Holy Ghost, greater than tongues. It would be a manifestation of the love of I Corinthians 13 that so many preach about and do not possess. When a man sells his all for God and distributes it for the kingdom’s good, it will speak louder of love than the evangelists who harp about love and oppose tongues and the other gifts of the Spirit.

Disease then is a disease, isn’t it? Make it two words dis-ease, broken law, wrecked ease, ease that had been destroyed. Ease is health. Dis-ease is sickness. Then God has condemned sin in the flesh, hasn’t He? There is no escaping it then; that is just what it means. Now there are three kinds of sickness: the sickness of the body; the sicknesses of the soul, and the sicknesses of the spirit. The basic sickness is spirit sickness. I venture this, that if you could be healed completely in your spirit every last one of you would be well in your bodies. But the whole problem is cleaning up a man in his spirit. Your body is tired the moment the spirit is discouraged. Your body breaks down under it. As long as your spirit is triumphant, you are a victor and you can go right on. A man is defeated only when he is defeated in his spirit. When he loses courage, he is whipped. The only way to put the man on his feet again is to renew a right spirit within him.

Faith is a product of your spirit, not of your intellect. Your intellect does not produce faith. Your knowledge may give you ground for faith, but faith is resident in your spirit.

A true Christian is unique. He stands alone. He supersedes all who have gone before. He will not have a successor. He is man at his best, and God’s best effort for mankind.

When the conception of a Christian has been established within our spirits as the New Testament establishes the ideal Christian, we will understand then how it is that men have been ready to abandon all else in the world in order to attain Christ, to attain His character, and to partake of His Spirit.